This is a limited edition signed print made from the orginal Supersize 3D painting by artist Morgan Howell. Morgan creates original paintings of classic seven-inch singles. This print is from his painting of the cover sleeve for The Rolling Stones' 1964 single 'It's All Over Now'. It features the artwork with the following wording underneath.

The Rolling Stones' cut of 'It's All Over Now' is the most famous version of the song. It was the band's third single released in America, it stayed in the Billboard Hot 100 for ten weeks and was their first ever #1 hit. The Valentinos' original version was played to the Rolling Stones during their first American tour in June 1964 by a New York radio DJ named Murray the K. Six months after Bobby Womack had apparently told Mick Jagger to get his own song, he received his royalty cheque and then told his manager that Mick Jagger could have any song he wanted. 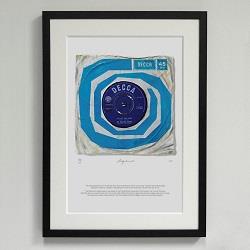