This is a limited edition signed print made from the orginal Supersize 3D painting by artist Morgan Howell. Morgan creates original paintings of classic seven-inch singles. This print is from his painting of the cover sleeve for Ramones's 1980 single 'Baby, I Love You'. It features the artwork with the following wording underneath.

"The Ramones were an American punk rock band that formed in the New York City neighborhood of Forest Hills, Queens, in 1974. They are often cited as the first band to define the punk rock sound. Despite achieving only limited commercial success, the band was vastly influential in both the United States and the United Kingdom. All of the band members adopted pseudonyms ending with the surname "Ramone", although none of them were related. Phil Spector produced the Ramones' cover version of ‘Baby, I Love You’ which appeared on their album, End of the Century in 1980. This single reached number 8 in the UK Singles Chart in 1980." 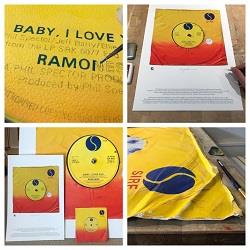