This is a limited edition signed print made from the orginal Supersize 3D painting by artist Morgan Howell. Morgan creates original paintings of classic seven-inch singles. This print is from his painting of the cover sleeve for Queen's 1975 single 'Bohemian Rhapsody'. It features the artwork with the following wording underneath.

"Queen’s ‘Bohemian Rhapsody’ was written by Freddie Mercury for the band’s 1975 album ‘A Night at the Opera’. The song has no chorus, instead consisting of several sections: a ballad segment ending with a guitar solo, an operatic passage, and a hard rock section. At the time, it was the most expensive single ever made and remains one of the most elaborate recordings in popular music history. The single topped the UK chart for 9 weeks and sold more than a million copies by the end of January 1976. It reached number one again in 1991 for 5 weeks following Mercury’s death, eventually becoming the UK’s third best-selling single of all time. In America the song originally peaked at #9 in 1976, however, it returned to the chart at #2 in 1992 following its revived popularity in the film ‘Wayne's World’." 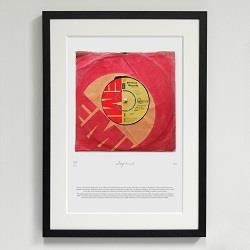 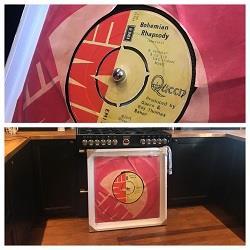