This is a limited edition signed print made from the orginal Supersize 3D painting by artist Morgan Howell. Morgan creates original paintings of classic seven-inch singles. This print is from his painting of the cover sleeve for Madness's 1980 single 'Baggy Trousers'. It features the artwork with the following wording underneath

"Baggy Trousers’ by Madness is from their 1980 album Absolutely and was written by lead singer Graham "Suggs" McPherson and guitarist Chris Foreman, and reminisces about school days in the London comprehensive. It was released as a single on September 5, 1980 and spent 20 weeks in UK charts, reaching a high of No.3. Suggs later recalled in an interview that "I was very specifically trying to write a song in the style of Ian Dury, especially the songs he was writing then, which were often sort of catalogues of phrases in a constant stream."

The print is in a limited edition of 75 and measures 32.9 x 48.3cm. The pictures below show how the print looks once it is framed and the original Supersize painting that the limited edition print was made from 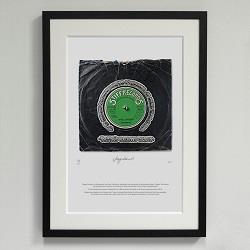 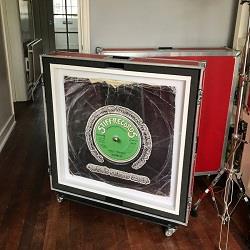