This is a limited edition signed print made from the orginal Supersize 3D painting by artist Morgan Howell. Morgan creates original paintings of classic seven-inch singles. This print is from his painting of the cover sleeve for Led Zeppelin's 1969 album 'Led Zeppelin II'. It features the artwork with the following wording underneath

In their first year, Led Zeppelin managed to complete four US and four UK concert tours, and also released their second album, entitled ‘Led Zeppelin II’. Recorded almost entirely on the road at various North American recording studios, the second album was an even greater success than the first and reached the number one chart position in the US and the UK. Here the band further developed ideas established on their debut album, creating a work which became even more widely acclaimed and arguably more influential. It has been suggested that ‘Led Zeppelin II’ largely wrote the blueprint for heavy metal bands that followed it. 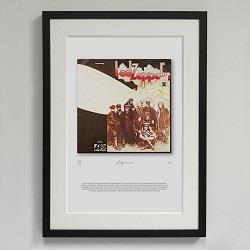