This is a limited edition signed print made from the orginal Supersize 3D painting by artist Morgan Howell. Morgan creates original paintings of classic seven-inch singles. This print is from his painting of the cover sleeve for Elton John's 1970 single 'Your Song'. It features the artwork with the following wording underneath

‘Your Song’ was released in the United States in October 1970 as the B-side to ‘Take Me to the Pilot’. Both received airplay, but ‘Your Song’ was preferred by disc jockeys and replaced as the A-side, eventually making the top ten on both the UK and US charts. In a 1975 interview with Rolling Stone, John Lennon recalled, "I remember hearing Elton John's 'Your Song,' in America - it was one of Elton's first big hits and I remember thinking, 'Great, that's the first new thing that's happened since The Beatles happened.' It was a step forward. There was something about his vocal that was an improvement on all of the English vocals until then." In 2004 the song was placed at number 137 on Rolling Stone's list of "The 500 Greatest Songs of All Time". The original piece is signed, 'All my Love Elton'. 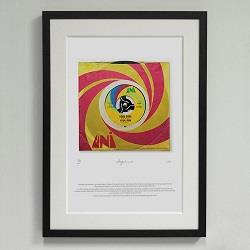