This is a limited edition signed print made from the orginal Supersize 3D painting by artist Morgan Howell. Morgan creates original paintings of classic seven-inch singles. This print is from his painting of the cover sleeve for The Beatles' 1965 single 'Yesterday'. It features the artwork with the following wording underneath.

The final recording of ‘Yesterday’ was so different from other works by the Beatles that the band members vetoed the release of the song as a single in the UK. However, it was issued as a U.S. single in 1965 reaching No.1. ‘Yesterday’ was voted the best song of the 20th century in a 1999 BBC Radio 2 poll of music experts and listeners and was also voted the No.1 pop song of all time by MTV and Rolling Stone magazine the following year. McCartney composed the entire melody in a dream one night, but didn’t complete the lyrics until much later. He borrowed an acoustic guitar from Bruce Welch, in whose house they were staying, and completed the work. 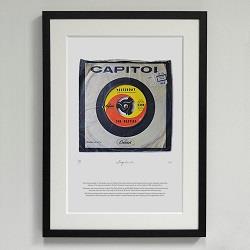 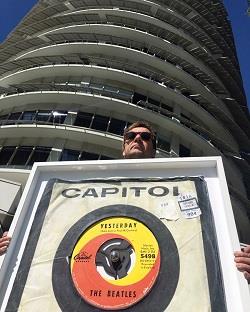