This is a limited edition signed print made from the orginal Supersize 3D painting by artist Morgan Howell. Morgan creates original paintings of classic seven-inch singles. This print is from his painting of the cover sleeve for The Beatles' 1964 single 'Love Me Dol'. It features the artwork with the following wording underneath.

'Love Me Do’ is the Beatles' first single, backed by ‘P.S. I Love You’. When the single was originally released in the United Kingdom on 5th October 1962, it peaked at No. 17. In the United States the single was a No.1 hit in 1964. It was primarily written by Paul McCartney in 1958–1959 while playing truant from school at the age of 16 and later credited to Lennon–McCartney. John Lennon contributed the middle eight. This piece was recently shown at Cassettes Versus Vinly in L.A. and also in the Green room at BBC Radio 2. It forms one half of a diptych with P.S I Love You listed separately. 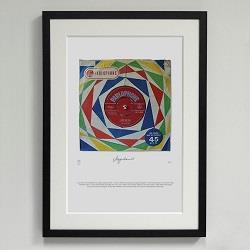 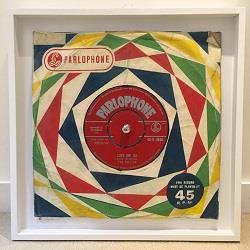