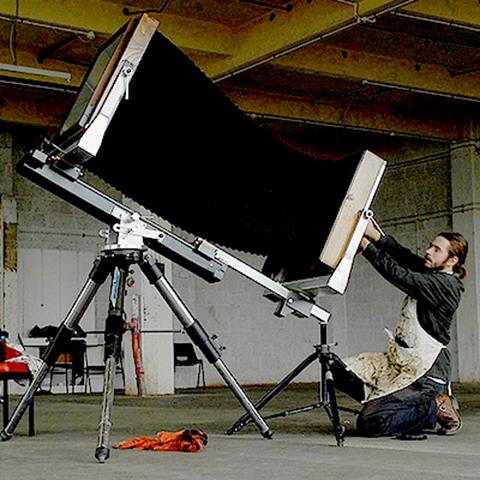 The son of a master carpenter who built horse drawn carriages for thirty years, Sebastian started building cameras from the wood that surrounded his home in Kent. With a camera he made from those trees, he has become a leading exponent of the 19th century Wet Collodion photographic process; He uses great sheets of treated glass in place of film in the camera. The process is long and arduous.. with a poetry of its own. And then there is the time spent pouring over the prints in the darkroom made from the glass negatives.

Sebastian spent a few years traveling and living in a mobile Darkroom, his "Darken" around various festivals and soon became known as a curiosity to those that appeared before his camera. Such as Josh t Pearson, the pixies, Richard Hawley, Mars Volta, shellac.. to name a few.

"I was lucky to grow up with a workshop and space to make and do the things I wanted too. It's been tough to keep doing that in London. So when the opportunity to open a new darkroom in Tottenham came up, I took it. Things are tight and I'm really pleased Radiohead gave me permission to make an edition of the portraits. It seemed to take forever to perfect the print but we have a great set-up here and the results can be seen in every unique image."

He regularly works on commissions and assignments in his distinctive photographic style and is based in London.