This is a limited edition signed print made from the orginal Supersize 3D painting by artist Morgan Howell. Morgan creates original paintings of classic seven-inch singles. This print is from his painting of the cover sleeve for The Rolling Stones's single 'Gimme Shelter' . It features the artwork with the following wording underneath

‘Gimme Shelter’ is the opening track to the 1969 album Let It Bleed and was written by the Rolling Stones' lead vocalist Mick Jagger and guitarist Keith Richards. The track features Richards playing in an open tuning on electric guitar. The recording also features stunning vocals by Merry Clayton who was summoned – pregnant – from bed around midnight by producer Jack Nitzsche. It was never a single in period but was released in Japan in 1971 as being “from 20th-Century film Gimme Shelter”, directed by Albert and David Maysles and Charlotte Zwerin, chronicling the last weeks of the Stones' 1969 US tour. The song has also appeared in three Martin Scorsese films. 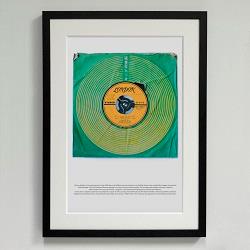 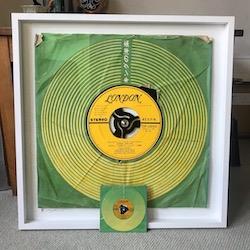