This is a limited edition signed print made from the orginal Supersize 3D painting by artist Morgan Howell. Morgan creates original paintings of classic seven-inch singles. This print is from his painting of the cover sleeve for Pink Floyd's 1979 single 'Another Brick in the Wall'. It features the artwork with the following wording underneath.

'Pink Floyd’s only No.1 hit was written by Roger Waters and was their first single since 1968's ‘Point Me at the Sky’; the song was also the final number-one single of the 1970s. ‘Another Brick in the Wall’ is the title of three songs set to variations of the same basic theme, on Pink Floyd's 1979 rock opera, The Wall, subtitled Part 1 (Reminiscing), Part 2 (Education), and Part 3 (Drugs). The single ‘Part 2’ sold over 4 million copies worldwide. Islington Green School paid for a new gymnasium with the proceeds of the choir’s performance.' 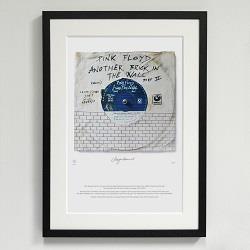