For all fans of Pink Floyd, what could possibly be better (Pink Floyd reunion aside) than seeing the great Dave Gilmour sing the classic song “Comfortably Numb” from Pink Floyd’s classic 1979 album The Wall live in concert?

Well, how about if Benedict Cumberbatch joined him on stage to sing along too?

Pink Floyd fan or not, pretty everyone is a Benedict Cumberbatch fan so this was a masterstroke. Nothing, it seems, is beyond Cumberbatch’s ability. Gilmour was on the third night of a five-night Royal Albert Hall residency in London touring his 2015 album Rattle That Lock when he was joined by the Sherlock actor.

Cumberbatch, who kickstarted the song, delivering the legendary line, “Hello, is there anybody in there?” was not quite as melodic as Gilmour in his delivery.

More colloquial with a bit of theatrics, but he was a great stage presence. And the audience no doubt lapped it up.

“Who knew he could sing?” Gilmour joked to the audience before letting Cumberbatch take over the vocals for the section, originally sung by Roger Waters.

Cumberbatch is no stranger to performing rock music himself either, for 2013’s August: Osage County he recorded a song called “Can’t Keep It Inside” for the soundtrack with musicians like Bon Iver and Kings of Leon.

But performing one of rock’s greatest tracks live on stage with a rock legend? That’s got to be one ticked off the bucket list. And, equally, performing with Cumberbatch might be one for Gilmour to tick off too. 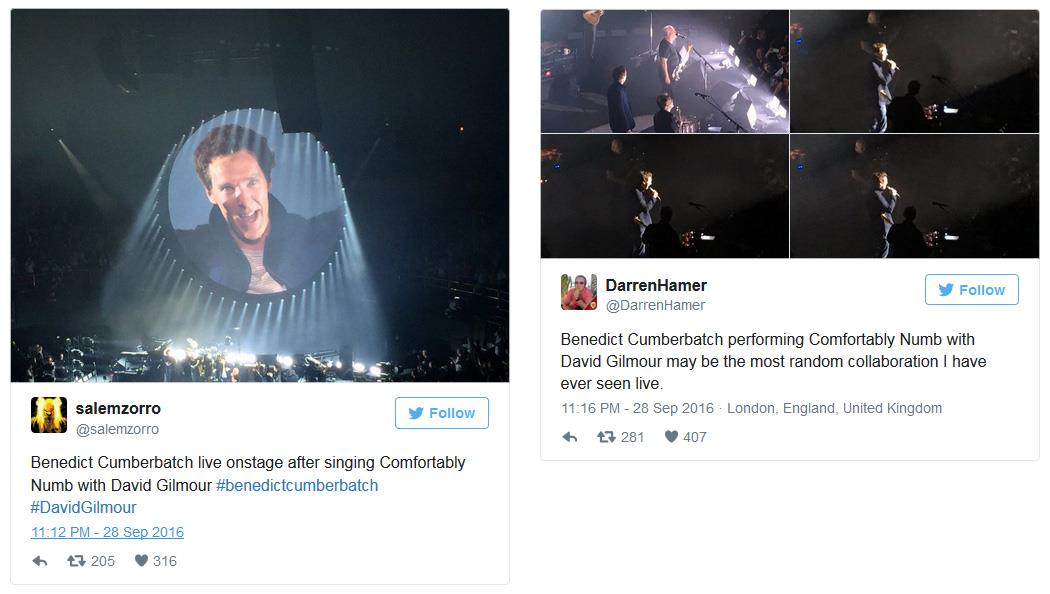